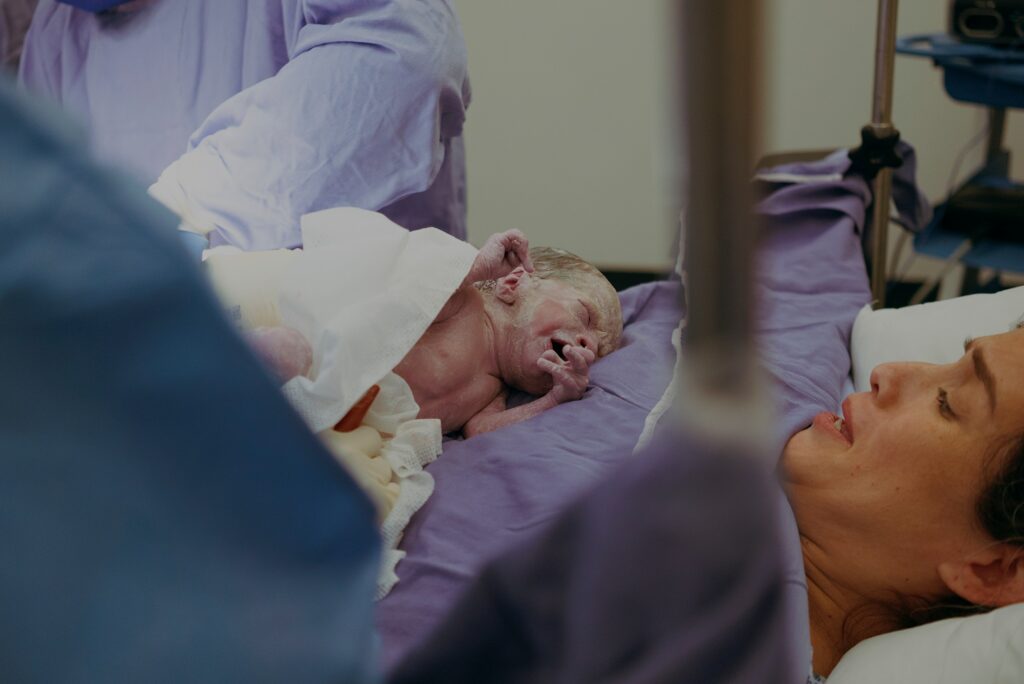 Half a century ago, continuous fetal heart rate monitoring became the norm with the hope it would improve neonatal outcomes. At the time, we were not sure of the causes behind many cases of cerebral palsy, intellectual disability, and more.

Decades later, that has not proven to occur. Continuous FHR monitoring for all does not improve neonatal outcomes. It is, however, associated with an increased risk of c-section birth. What do you need to know as a doula? Read on to learn more.

As doulas, it is important to understand that there is a role for FHR monitoring, whether intermittent or continuous. There are specific circumstances where continuous monitoring is safest for baby.

However, what evidence shows for the general population is that continuous FHR monitoring increases the risk of c-section without decreasing poor neonatal outcomes on a population level.

You can read the full publication on the NIH website, published in 2016. Meaning, we have had evidence for years showing fetal monitoring does not necessarily reduce the rate of cerebral palsy. This was one of the main reasons for the initial development and push for continuous monitoring.

With intermittent monitoring, along with looking at the overall picture of the birther and baby, can reduce c-section rates without increasing poor neonatal outcomes. It is important for providers to begin following evidenced-based information. New guidelines aim to support that.

The study mentioned above also states:

“Use of electronic fetal monitoring to prevent cerebral palsy was based on several erroneous assumptions. Firstly, fetal heart rate decelerations are commonly associated with peripheral chemoreflex rather than compression of the fetal head or umbilical cord and may be relatively unthreatening. Furthermore, studies consistently show that most cases of cerebral palsy in babies born at or near term are not caused by birth asphyxia but associated with congenital malformations, fetal growth restriction, intrauterine exposure to infection or inflammation, and other unknown factors.”

Simply put, we are still learning:

What Are Current Recommendations?

However, a new 2022 publication in the Journal of Obstetrics and Gynecology summarizes a new recommendation saying in brief:

“Evidence-based medicine should replace tradition in the use of electronic fetal heart rate monitoring.”

In more detail, the journal states the following:

“…after a half century of use and millions of cesarean deliveries based on FHR monitoring, evidence for such improvement remains absent. This dichotomy appears to be related to widespread misconceptions regarding the physiology underlying various FHR patterns and the developmental origins of cerebral palsy. These misconceptions are strengthened by a reliance on anecdotal experience and tradition in lieu of evidence-based medicine, the confusing “category II” FHR designation, medical-legal considerations, and our tendency to view fetal monitoring, as originally conceptualized, as a single, indivisible entity whose concepts must be accepted or rejected en bloc. Ill-defined and largely imaginary conditions such as “depletion of fetal reserve” are particularly harmful and their use in clinical medicine uniquely not evidence based.”

What Does This Mean For Doulas?

As doulas, many of us have long been aware of the risks of continuous fetal monitoring for all births. This means more than just one’s with medical necessity.

There is evidence to support the use of continuous FHR monitoring when baby is at risk of fetal distress. Some examples of that include due to prematurity, congenital birth defect, or the need for Pitocin.

However, for typical birth situations, especially unmedicated ones, continuous fetal monitoring can:

During prenatal meetings with clients, it can be helpful to educate them about birth options. Encourage them to have conversations with their providers about continuous versus intermittent monitoring. Doulas need to take time to provide clients with many resources. Point them to evidenced based resources so they can make informed decisions about their care. Finally, support them in whichever decision they make.